This is another skillset that one can buy in. Hours or in my case years have been spent writing, rearranging, or editing and conventional wisdom is that a third party coming fresh to a manuscript is best placed for the task.

However I had worked with an editor whose final task was to complete a line edit and I was happy with the result. My decision was to proofread my own typeset work which I started after reading numerous online tips which included:

– reading each paragraph from the back of the book

– starting only after leaving the manuscript alone for some days

– read in another format or typeface

I discovered more amendments than I had expected but as the blog below suggests it is easy to miss the obvious.

How often have we seen is that there is a gap between what is written and what is read. Often the state of mind we are in influences how we interpret a written word or phrase. The same holds good for a picture or a symbol. The mind undoubtedly plays a trick in such interpretations.

Let me give two examples: 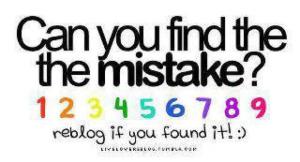 Same way a written word is, more often than not, not interpreted the same way as it is meant to. The mind plays tricks and influences what we finally interpret from what we see and read. The interpretation that I speak of, is not only about know the meaning of the used word but goes beyond it and is more about the drawn perception upon reading the word. Another example is:

Aoccdrnig to rscheearch at Cmabrigde Uinervtisy, it deosn’t mttaer in waht oredr the ltteers in a wrod are, the…